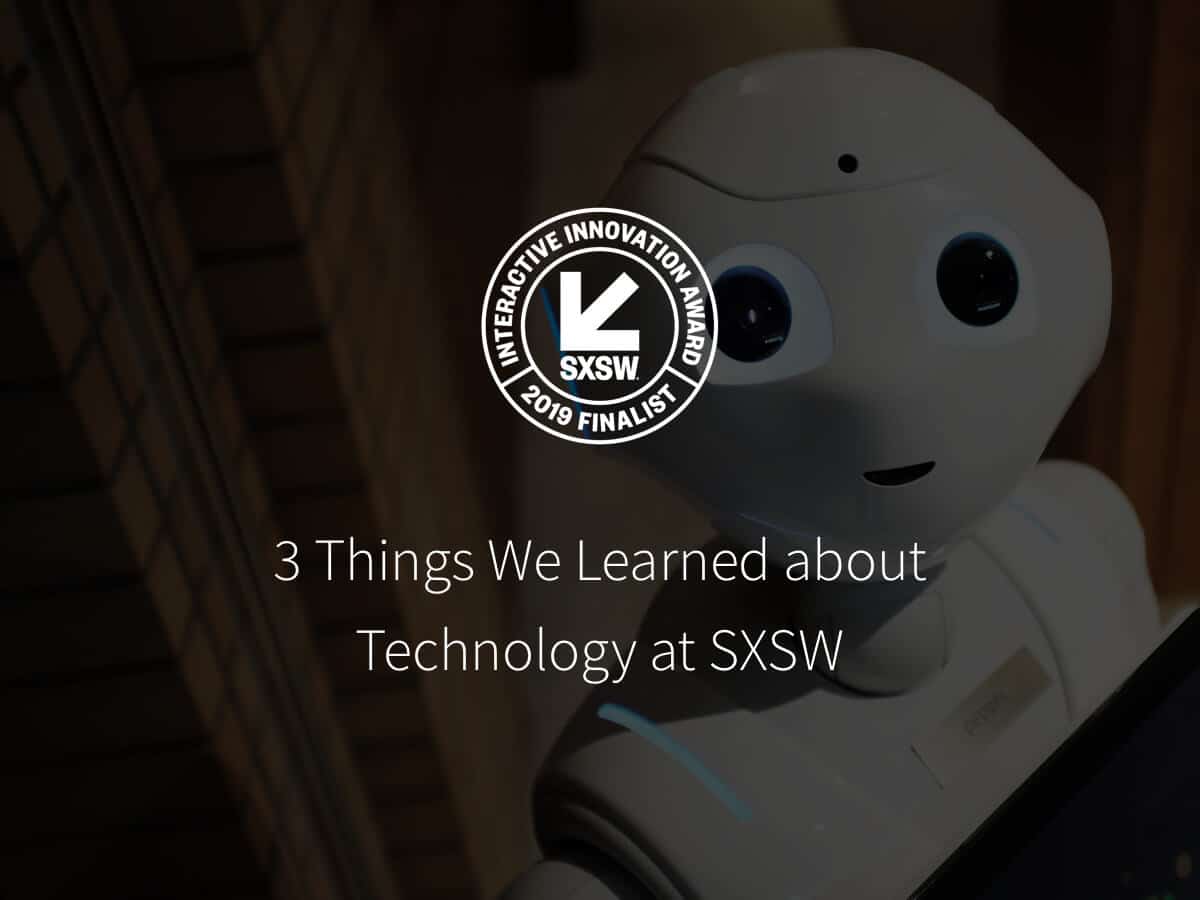 Identity.com was announced in July 2018, and in our very first year as an organization, we were honored to be selected as a SXSW Interactive Innovation Awards Finalist along with other companies that are building and introducing exciting technologies.

SXSW was an amazing opportunity to travel to Austin, Texas, and connect with creators and innovators around the globe. For an event that started as a music festival nearly 30 years ago, SXSW has evolved into one of the most exciting and respected technology showcases in the world. SXSW was an opportunity to give people a taste of the power of Identity.com and a reusable identity, but we also walked away with new ideas about how technology will shape the future of our world.

SXSW has become a cultural meeting point, where key tech stories emerge. Did you know that Twitter actually came to life at SXSW in 2007?

From our experience this year, we put together three key takeaways about the future of tech, what we expect to see in upcoming years, and what we left inspired by.

Technology is moving beyond just technology

When technology was first invented, there were things like email and the Internet that fundamentally changed how people interacted in the world. The idea of technology and the things people could do, like sending a letter through a screen, was a novelty in itself. Yet, as technology has continued to evolve, it remains an infrastructure that is often available only to people who can access it.

At SXSW, we’re seeing more and more companies that are focused on increasing the accessibility of technology and introducing technology that solves real-world problems. Identity.com is a great example of this. We’re trying to make digital identity accessible for people around the world, not just those who have access to emerging technology.

The Living First Language Digital Platform is another example. The platform is leveraging technology to preserve and revitalize Indigenous First Languages.  These are ambitious goals, but we’re happy to have the company and see more and more companies leverage their technology to solve for critical cultural and social issues.

Echoing the sentiment above, introducing technology is not just for the sake of new technology. We’re now seeing technology that is focused on solving challenges from simplifying our daily lives to solving global challenges, like identity.  With emerging technology, this is increasingly possible.

Even further, it’s becoming clear that people care about companies that are making an effort to do good, even if the product doesn’t. Tech companies are responsible for having causes and passions almost like individuals. The social impact of a company is important, as well as their stance on diversity and inclusion. It’s no longer just about the bottom line or the technology, we’re looking at companies as a whole package, more than just revenue numbers.

Aflac, a company well-known for its insurance commercials featuring the Aflac Duck, introduced the  Special Aflac Duck. As part of the Aflac Childhood Cancer Campaign, they introduced a robotic duck that can be a companion for children during cancer treatment. It’s a heartwarming campaign that moves from the traditional scope of an insurance company and simply aims to give back.

Technology and trust have to come together

Society has evolved. When you log on to any social media platform, you literally have access to billions of people across the globe in the palm of your hand, and as connectivity has increased, we engage and interact with more people around the world than any generation before us.

Online interactions provide opportunities for fraud and misappropriation of identity. Technology has exacerbated this uncertainty and creating a lack of trust that has ramifications throughout society.

Think about Equifax, Facebook, or Marriott. These are companies that we expected to keep our information safe, and now, personal data is spilled, which has the ability to affect our day-to-day lives, whether that means identity theft or impacting Presidential elections.

Many different technology companies can help address these issues of trust. Technology is looking at ways to address this trust. Identity.com is one of several companies that are addressing the identity crisis and creating a new, safer way to prove and verify identity online.