What is Identity in the Metaverse? 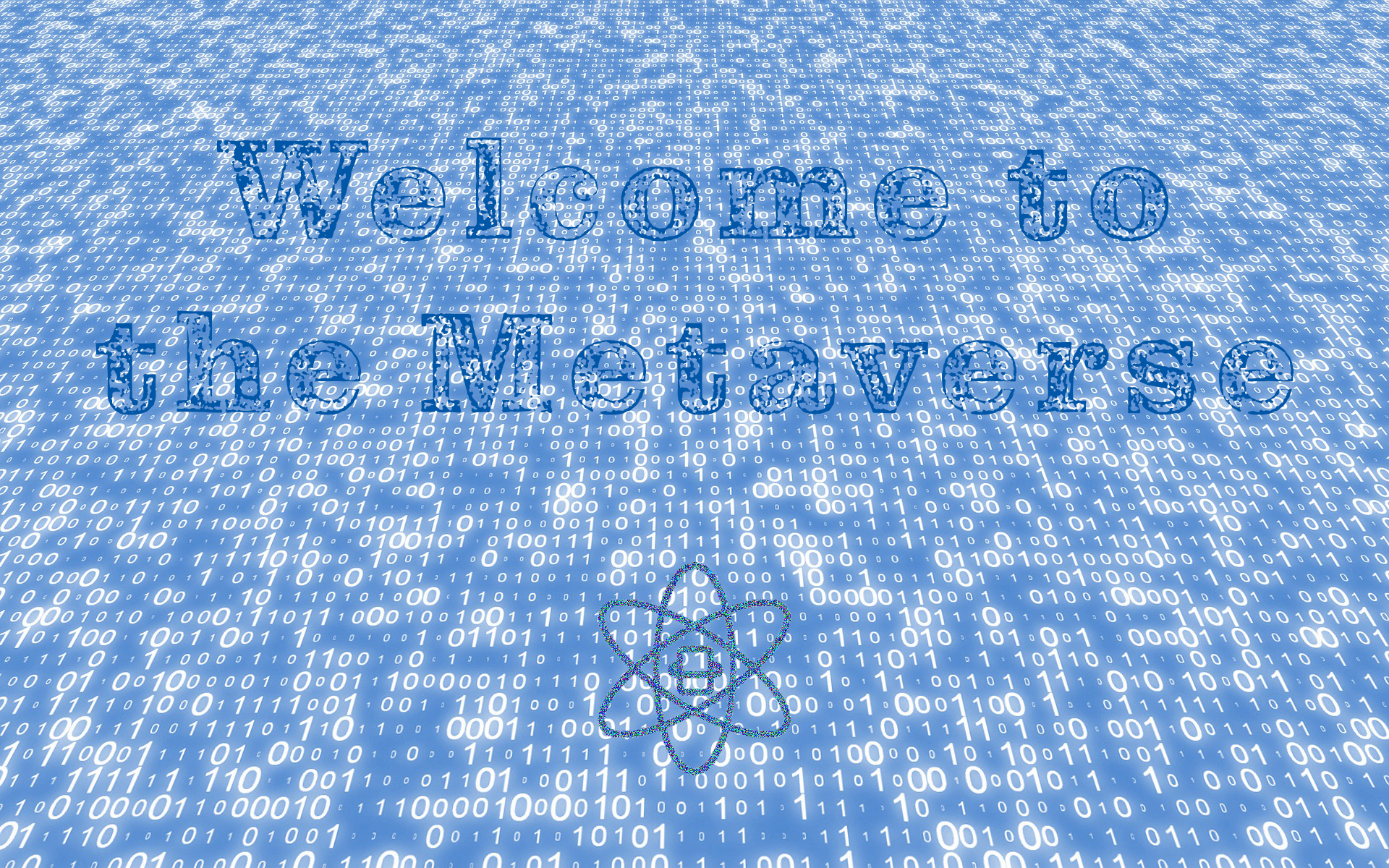 What is Identity in the Metaverse?

The metaverse, as coined by Neal Stephenson in his dystopian cyberpunk book Snow Crash, describes a series of connected virtual reality worlds that represent the Internet, where users can interact, game, and experience things as they would in the real world. Before Snow Crash, another writer William Gibson called this world cyberspace and wrote about it in Neuromancer. In these synthetic worlds, people are represented by avatars and pseudonyms, as you have seen in movies like Ready Player One.

When I speak about Identity in the metaverse, some people get confused. People may wonder what Identity means in the context of the metaverse. After all, isn’t the metaverse only about avatars and pseudonyms?

To answer this question, we must dive into what identity truly means.

“The chief principle of a well-regulated police state is this:
That each person shall be at all times and places… recognized as this or that particular person.”

Starting with personal identity, let’s look at the three kinds of identity:

According to Psychology Today, identity consists of memories, experiences, relationships, and values that contribute to one’s sense of self. Despite adding new facets daily, this allows you to establish a steady sense of yourself over time.

As people constantly cultivate their visible identity: clothing, shoes, hairstyle, hair color, makeup, jewelry, and more, personal identity is one of the most cultivated components of their lives. On a daily basis, how many people obsess over their outfits? And why do they do this, because they want to ensure that their look aligns with their personality in an outward-facing way. Why? It is because people judge others by their outward appearance and use that judgment to bring like-minded individuals together. This is how many people find their tribe.

But these personal identities change over time. During my teenage years, my primary identity revolved around skate and surf culture, and you could tell that by looking at me. As I grew older, my primary identity revolved around Harley Davidson motorcycles, and there was never a day when I wasn’t carrying something related to HD. Having those personal identities enabled me to meet more like-minded people, who later became close friends, enabling a more honest exchange of values.

Your social connections represent your social identity: clubs you join, political affiliations, interests, hobbies, and possessions. Some of these things can be seen through your clothing and, therefore, part of your personal identity, while some clothing choices may reflect a broader social identity.

But not all of your social identity can be tied to an article of clothing. Sometimes, it is more about who you associate with and what you own, like a car or an NFT. For many people, social identity is something that can be purchased. For example, people love the Bored Ape Yacht Club (BAYC) community so much they are willing to pay a premium to join it. So that right there is social identity.

Social identity is built up through so many things. For example, it can be pulled from social sources such as  LinkedIn (for the companies you’ve worked for), GitHub (for the code and repositories you’ve worked on), Discord (projects you align with), Twitter (for whom you are connected to), and Udemy (for your studies).

In Identity is the New Money, when discussing social identity, David Birch writes, “Identity is returning to a concept built on networks, rather than index cards in a filing cabinet.”

How would you describe your legal identity? Is it your driver’s license or your passport? Is it your birth certificate? Or is it about the way you look? The United Nations defines your legal identity as the basic characteristics of an individual’s identity. e.g. name, sex, place, and date of birth conferred through registration and the issuance of a certificate by an authorized civil registration authority following the occurrence of birth.

The three key components of a legal identity are descriptive, locational, and civil:

While other aspects of your identity evolve and change over time, these legal aspects tend to stay fixed.

Legal identity is often needed to do certain things around the world, but it varies from place to place. For example, some nations require that people are age-gated to view pornography, order/consume alcohol, or gamble. And over 200 countries/jurisdictions have enabled the Financial Action Task Force (the global money-laundering watchdog) to require that cryptocurrency transactions be associated with legal identities. The region where you live determines what you can and cannot do online.

In the metaverse, nothing changes from the perspective of legal identity. Many in the Web3 and Metaverse communities want to remain anonymous. The better choice for individuals and the industry is to be pseudonymous.

One of the most beautiful things about the Internet is the ability to be anonymous. Being anonymous is considered to be necessary for freedom of speech, but in reality, it is very liberating. As a result of our current cancel culture, people are afraid to speak their truth out of fear of being rejected by the mob. It may take years to build your stellar reputation, but if you say the wrong thing, it can be destroyed in seconds.

On the other hand, interacting with people on the Internet can be problematic. People are bullied or become bullies when they are anonymous. Why not? After all, “On the Internet, nobody knows you’re a dog.” 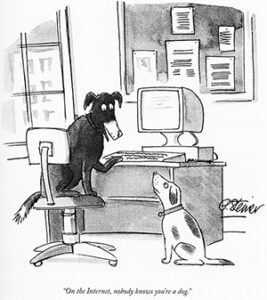 This cartoon, circa 1993, was published in The New Yorker right before the World Wide Web was created and years before billions of people got online and learned what this truly meant. It seems as though nobody can be trusted on the Internet. And this will remain true for the metaverse.

For many, pseudonymity solves this problem. In pseudonymity, one fully identifies themselves to a service (KYC or Know Your Customer) and connects it to reputational partners like LinkedIn, Twitter, and GitHub but is only ever known by their pseudonym. Nobody but the underlying individual knows their true identity, and reputation can be a signal of trust in that individual.

A pseudonym is not a new concept, nor does it only occur on the Internet. Artists often use pseudonyms: the writer Samuel Clemens, for example, is better known under his pseudonym of Mark Twain. The musician Stefani Joanne Angelina Germanotta is better known as Lady Gaga, and Norma Jeane Mortenson is better known as Marilyn Monroe. The use of pseudonyms, pen names, and screen names has been around for hundreds of years.

There are many reasons why someone might want to use a pseudonym when interacting online. For many, this is a way to provide protection when exercising their freedom of expression. As a result, they can express their true beliefs without being ostracized by those around them. Others use this to hide their religion or race online to reduce bullying or harassment. Additionally, some might want to disguise their gender when applying for jobs in the tech sector, as women are significantly underrepresented in the tech sector.

In the Internet and Web3 communities, pseudonymity is used in varying degrees, and is frequently seen on Twitter, Discord, and other platforms. While Elon Musk tweets under his real name, thousands of others tweet under a pseudonym. Then you have companies like Yuga Labs (the producers of the Bored Ape Yacht Club) that work entirely under pseudonyms (the founders are Garga, Gordon Goner, Sass, and Emperor Tomato Ketchup). And this is just the beginning.

Identity in the Metaverse 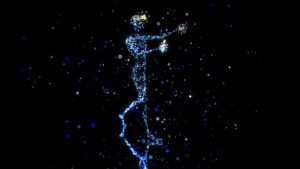 People who are overly concerned with the impression they make or who feel a core aspect of themselves, such as gender or sexuality, is not being expressed can struggle acutely with their identity. A powerful catalyst for change can be reflecting on the discrepancy between who we are and who we want to be.

The metaverse, however, takes the ability to modify your identity to new heights. This world allows you to customize more than your clothing and accessories—you can choose to not be human at all! In the metaverse, you will find people representing themselves as horses, unicorns, gnomes, aliens, apes, and so much more. There’s something great about the metaverse: you control everything.

Your social identity, the one that you have built for years, has the ability to follow you into the metaverse if you want it to. Maybe I simply want to be pseudonymous, and I don’t want the baggage of my past to follow me. If I disengage all social identity markers, I could live my life as a new entity, knowing that some people might not trust what I say or do online. Others, however, may want that history as it helps people trust them in areas in which they have knowledge.

Many articles have written about identity and the metaverse, and one component, which I believe is the most important, has not been addressed: legal identity.

The metaverse has the ability to take us out of our real world and place us in alternate realities with infinite possibilities of experience. Regardless of who you are or where you are located, you are free to be whomever you want.

In the metaverse, however, your legal identity is determined by what you do, just as they are in the physical world. What you are allowed to do online is governed by the laws of the territory in which you are present. In Nevada, if you are 21 years old or older, you can gamble at a casino, in real life, online, or a virtual world. California residents are not allowed to gamble in a Nevada casino, online or otherwise, regardless of their age. Your location and legal identity govern metaverse behavior.

Jurisdictional laws are the reason why legal identities matter in the metaverse.

In the metaverse, your identity carries a lot of power. Unlike the real world, your personal identity can be completely transformed in the metaverse: your body, your shape, your hair, your eyes, everything about you can change. That is everything except your legal identity. Until a given metaverse is recognized by the world as a network state, and you are a legal resident of that nation-state, your legal identity in the real world will bind you in the digital one.

Identity.com is building a set of protocols and technologies that will aid in your ability to live a life pseudonymously, with KYC/AML, reputational markers, international partners, and the tools to protect every aspect of your digital life.